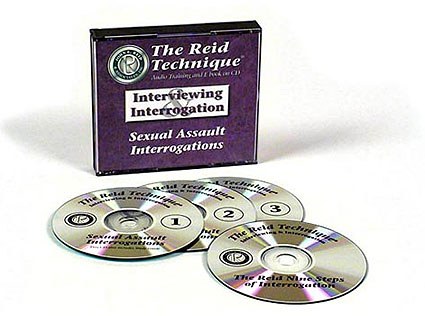 This 125 minute audio course with accompanying study guide follows the same successful format as our Employee Theft cassette course. There are six different examples of sexual assault interrogations. For easy listening, the course is divided into seven separate training segments, each lasting between 15 to 20 minutes.

THE SEGMENTS ARE AS FOLLOWS:

PROFILING THE SEXUAL ASSAULT SUSPECT
There are several different classifications of individuals who commit sexual assaults. Through analysis of the attack, the investigator will learn how to classify the offender and how to use this information to select proper approaches during an interrogation.

POWER MOTIVATED RAPES
In this example a delivery man rapes a woman in her apartment. Significant portions of the suspect's behavioral analysis interview are discussed to help develop an interrogational strategy.

INTERROGATIONS BLAMING ALCOHOL
In this example a psychologist is accused of forcing a woman to engage in oral sex with him in a stairwell. After the suspect is profiled, the listener learns how the investigator uses the professional status of the suspect to help him elicit a confession.

ANGER MOTIVATED RAPES
The victim is walking home one night from a friend's house and is attacked and brutally raped. The investigator will learn how to draw out from the suspect the precipitator which caused him to rape the woman. The listener hears how this information is used to successfully interrogate the suspect.

GANG RAPES
The listener learns about the psychology of gang rapes, and listens as the interrogator plays one suspect against another, and presents fictitious evidence to get one of the suspects to confess and then implicate the other two suspects.

INCIDENT LIBERTIES
The most difficult sexual assault investigation involving sexual contact or incest with a minor is when the victim is very young. The listener will learn guidelines to profile and interrogate the suspect in these cases. After the interrogator elicits the first admission of guilt, he uses a very effective approach to establish the frequency that the suspect sexually touched the victim.

FALSE CLAIMS OF RAPE
In this discussion the listener learns the guidelines to distinguish between real and fabricated rape complaints, as well as the motivations behind the claims. The listener hears how an investigator uses this information to elicit a confession from the "victim" who filed a false rape complaint.

Included with the sexual assault course, the investigator also receives the Reid Nine Steps of Interrogation. Even if you handle only a few sexual assault investigations a year you will benefit from the instruction offered in this course.

The latest news, articles, and resources, sent to your inbox weekly.